Virginia and I just got back from a quick trip to Panama, combining touristy relaxation with some wandering around the city (especially the old city). Panama is very forward-looking and economically driven, especially after taking over the Panama Canal’s operation in 2000. Even our tour guide remarked on how Panama was pretty sleepy as a country before the Americans arrived to build the Canal. So it was fascinating to be in a city that both aims for a prosperous future and (only recently) seeks to preserve some of its past.

We spent a fun Christmas Eve with my mother, brother, and nieces before driving to the airport. Thankfully we encountered little traffic, which we feared due to the holiday. Similarly, getting through security was fairly straightforward and delay-free. We were flying in first/business (domestic/international) this trip due to a fantastic deal on American Airlines. So we decided to try the Admirals Club lounge, thinking our tickets should get us in.

Nope. We were told we’re not allowed in because our flight from Miami to Panama City (the qualifying leg) was too far in the future… almost four hours too far, to be specific. So instead we headed to the nearest wine bar to wait for our flight. (Incidentally, we’d both temporarily given up alcohol since our last trip due to the weight gained from so many big meals. So this was extra good.)

The flight to Miami was easy and smooth, though we ended up touching down a few minutes late. Virginia had made reservations for 11:30pm at a restaurant inside a hostel not far from the airport, but we landed and knew we wouldn’t make it. So she called them three times. Twice she got voicemail; the third time was routed to the front desk, who then sent her to the same voicemail. We arrived at 11:45pm to find it was completely closed. The hostel staff basically shrugged and said, “They closed early.” Well deduced. Bearing in mind they were supposed to be open past midnight, we were less than happy. Even though the distance from our hotel to the restaurant wasn’t far, the taxi in each direction was on the order of $40. There was nothing to be done about it but to go to bed and try to look forward instead.

Merry Christmas! We’d already celebrated with family the previous day, so this was mostly conveyed via text to a few close friends.

We slept in a little longer than usual, figuring we were next to the airport and had plenty of time. Wrong. Instead, we found the free shuttle ran only every fifteen minutes and we had just missed one. Thankfully, a taxi was available and got us there quickly.

We were able to make up some time by going through the TSA Pre-Check security line (still a very good use of $100). Because our next flight was leaving the country, we could now use the Admirals Club lounge. It was crowded and we only had time for a coffee and a bite to eat, but still a welcome respite. It also meant we didn’t have to go searching for a Starbucks, which is important as Miami’s airport is both long and irregular in its retail availability. Thankfully, we were going to be fed on the plane, and that turned out very much needed for us. 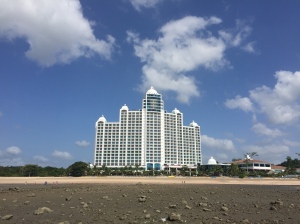 After clearing passport control, we ended up using Uber to make our way out to our first hotel of the trip, the Westin Playa Bonita. It was about the same price as a taxi, and likely more comfortable. The hotel itself is basically a self-contained resort, with restaurants, pools, and beach access. Once we arrived, we didn’t leave the grounds until we checked out about forty hours later. It was unapologetically touristy, and that was fine by us. We wanted today and the next as the “do nothing and relax” part of the trip, and we got it.

We spent the afternoon at the pool before enjoying a few glasses of wine at the rooftop lounge’s happy hour. We then had a late dinner at one of the hotel’s two higher-end restaurants, Tierra y Fuego. Steaks and wine were both very good, and we ended the day both satisfied and ready for another day of relaxation.