I arose early in the morning to get breakfast for everyone (now that the boulangerie was a routine). Andrew, Catherine, and Gigi bade us goodbye around 9am or so for their drive to Paris and the remainder of their trip. The sky was already cloudy, and I remember remarking it was good driving weather due to the lack of sun.

WRONG. The rain started around 10am, which I’m sure they had to drive through. Fortunately, it didn’t seem to dampen their spirits (pun fully intended), as they texted us pictures during the day from the places they visited on the way.

We stayed inside all day as rain continued on and off. We had some remaining charcuterie for lunch and spent quality and quantity time with the kittens. All in all, a normal rainy day. 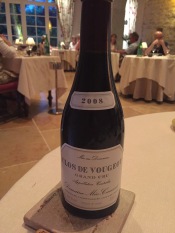 The weather cleared up in early evening, so we decided to see whether Le Montrachet, the villages Michelin-starred restaurant, could seat us. They could, and immediately (yay!), so we went in, more or less underdressed for the occasion (at least I was — Virginia wore a sundress). We chose one of the set menus, alternating the options so we could try everything, and paired everything with two half-bottles of wine (Amiot Guy et Fils Chassagne-Montrachet Les Vergers 2006 and Meo-Camuzet Clos de Vougeot 2008). Everything was outstanding and a great way to end a transition day.

After a day mostly inside, we spent the next day almost entirely out of the house. After the usual breakfast, we raced up to Beaune to pick up a few things at the weekly market. After returning to Puligny-Montrachet and stowing our food, we drove south to Lyon to see the city and pick up our friend Caryn. The drive itself was easy (hooray for European motorways!) until we reached the toll booth just north of Lyon. The lines were simply ridiculous, even though they had many booths open. We didn’t know whether our credit card would work for the toll, so we avoided the credit card-only booths for the much longer cash/credit booths. As a result, we spent about 45 minutes in line, turning what should’ve been a ninety-minute drive to well over two hours.

As a result, we arrived at the train station around 1pm rather than noon as we planned. Instead of eating a more leisurely lunch at a café, we instead grabbed sandwiches at the station and ate them as quickly as possible before starting our lookout for Caryn. We had a couple of miscues and her phone wasn’t working correctly, but we managed to find each other and head out.

For better or worse (likely worse), I don’t react well to unexpected schedule changes. At work I seem to hold it together better, but otherwise I need to take a few moments and pull myself together. That happened while we drove over to Vieux Lyon and parked the car in a more convenient location. We came up at the Place Bellecour, a large square between the Rhône and Saône rivers and walked north to my destination of choice — the local Nespresso boutique. (The house includes a Nespresso machine and I really wanted capsules for the remainder of our trip.) 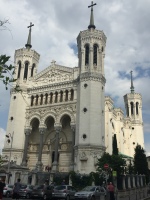 From there, we crossed the Saône, stopped by the Cathedral of St. John the Baptist, and then walked uphill to the top of the hill where the Notre Dame Basilica, and perhaps Mary herself (according to legend), watches over the city. The views from there are stunning, and the basilica is well worth the journey. Of course, you could take the funicular up instead, which is how we descended. A quick walk back to the parking lot and we were on our way home. (By the way, our credit card definitely works in the toll booths, which made future travel easier.)

We ate dinner in, using the food from the morning’s shopping. I made a Guinea fowl roast (basically, the meat off the bone, rolled into a roast and wrapped with twine), buttery mashed potatoes, and a tomato/bell pepper/zucchini medley.

The previous day’s activity and travel gave way to a quiet, relaxed morning. The three of us ventured to the Chagny market in late morning, buying enough meat, cheese, and vegetables to get us through the next few days. We also bought a rotisserie-roasted Bresse chicken to have for lunch with our leftover vegetables, a change from our usual charcuterie approach.

Once we were home and fed, no one had anything specific planned or desired. So we moved to the living room where Caryn played piano for a couple of hours while Virginia and I napped. Just perfect for our collective mood. Continuing the laid-back lifestyle of the day, we took a short walk around the village as the sun lowered behind the ridge.

Once we got home, Virginia suggested we play a game, specifically Kill Doctor Lucky. Caryn hadn’t played before, but got into it fairly quickly. We played three rounds before dinner, and each of us won once. We still had Guinea fowl roast from Saturday, so I sliced it cold and pan-seared the slices on both sides. I also made roast potatoes, where each one had a tiny bit of butter on top to melt in during roasting. Steamed green beans rounded out dinner and the end of the day.