Another day with excellent weather awaited us. Virginia wanted a more full-on breakfast, so we walked up to Henrietta’s at the Dewberry Hotel and sat outside (a treat!) with coffee, an omelette for me, and eggs benedict for Virginia. Our table looked across Meeting Street to Marion Square, and again we took in as much sunshine as possible.

After breakfast, we walked across the square to King Street, where most of downtown Charleston’s shopping can be found. It was the biggest shopping day of the year, after all, and we were curious about what was on sale. So we headed north and then south, peeking into the occasional shop but ultimately buying nothing.

After a large breakfast, we didn’t want much of a lunch. We did want coffee, though, and Charleston has some great options. Our favorite of the trip turned out to be Black Tap, which was also served at Henrietta’s. Black Tap turned out to be located in a converted house a couple of blocks off King Street, making it more of a neighborhood find than a tourist trap. They’re known for their pourover coffees, and it didn’t disappoint. We broke out our ever-present books and hung out for a while before continuing on.

We wandered west, walked around a man-made pond called Colonial Lake, and headed back east on Broad Street to East Bay Street. We stopped again for a coffee break, this time with a little food. There’s a place called Bakehouse on East Bay that we’d wanted to try the day before, but they were predictably closed for the holiday. We’re glad we tried again — the coffee was good and we each got a wonderful strata with sausage and mozzarella. Just the right savory treat to get us to dinner. We walked back south to the Battery to watch the sun set, then it was time for dinner.

Remember when I said we decided we needed to try both McCrady’s tavern and restaurant? Well, now it was full-on “Sean Brock making exactly the food he want to make” time. We arrived a little early and waited outside until the doors opened, and then were seated at the bar with glasses of sparkling wine as everyone else arrived for the seating. We renewed our acquaintance with Matthew and met the other staff, and then settled in for two hours of awesomeness. 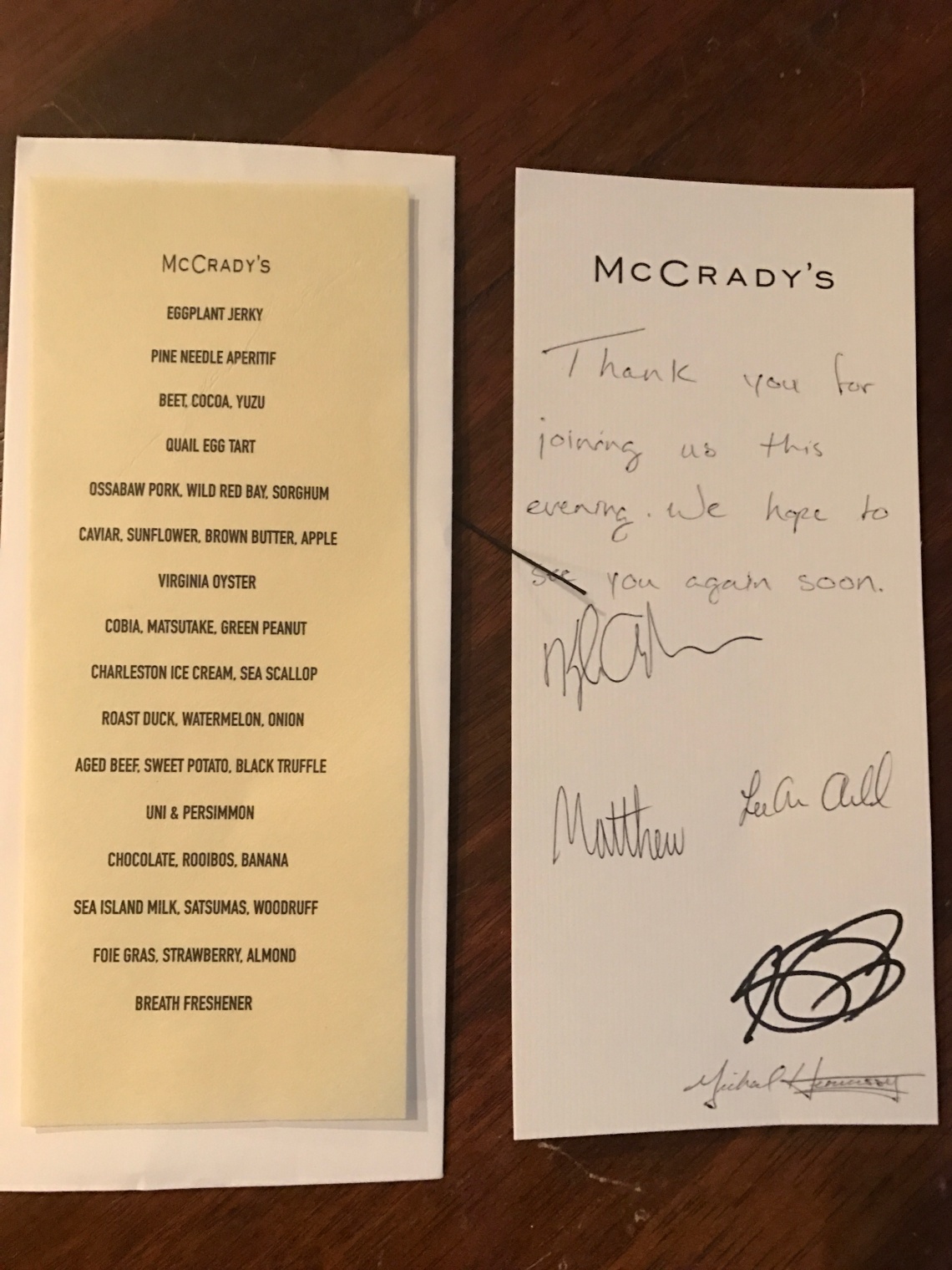 Our flight wasn’t until 9:30pm, but we needed to check out by 10am. So we got going early, leaving our bags at the hotel for the day. We had breakfast at Bakehouse — coffee and sausage/egg/cheese biscuits — before walking up to Classic Carriage Works for a carriage ride tour. It’s worth noting that Charleston tightly controls the carriage rides, with three specific routes (given to tour guides at random) and a cap on the number of carriages out at any one time. We had done one of these when we first visited in 2003, and hoped for (and got) a different route. This time we went west to King Street, then south to the Battery, then back up Meeting Street before returning to the stables. We got some fun details about the historic buildings and learned about how they take care of the horses (which we’d been speculating about and were happy to hear).

After the ride, we walked through the City Market and continued on Market Street for a while before returning to East Bay Street and brunch at High Cotton. After the previous three days, we kept it simple — a vegetable-stuffed omelette for Virginia and fried chicken sandwich for me, splitting their version of mimosas (a half-bottle of sparkling wine and a selection of juices to mix).

We had been trying to figure out what to do with our last day and decided we should visit a couple of museums. First, we went to the Old Slave Mart Museum, which is housed in one of the more notorious slave auction showrooms of the 1850s and 1860s. Before then, slave auctions took place in public along the docks. As the debate on abolition intensified, Charleston’s leaders decided to ban public auctions, which only led to private ones. Inside the museum, there are a handful of exhibits giving voice to the slaves, sometimes literally (through recordings taken in the 1930s). It’s a fairly intense and sobering experience, and well worth the time.

After a quick coffee at The Rise, we visited the Gibbes Museum of Art. The Gibbes focuses on art from and about the region, which offers a distinctive experience from visiting larger and more internationally known museums. We spent perhaps an hour and a half looking at paintings, sculptures, and furniture. The highlight was Rossi’s “Veiled Lady” sculpture, which must be seen up close to see that the veil isn’t actually made of translucent cloth.

We returned to Black Tap to relax with a coffee and reading materials before walking to Hank’s Seafood for dinner. This was a last-minute addition after a colleague recommended it, and we were so glad he did. Hank’s is all about lowcountry seafood done right, and it fit our mood perfectly. Virginia started with she-crab soup while I went with oysters casino (broiled with garlic butter, Bacon, asiago cheese, and bread crumbs). Main courses were bouillabaisse for her and seafood a la wando (shrimp, scallops and fish sautéed with sherry, crabmeat, mushrooms, and scallions in a saffron cream sauce with a fried grit cake), paired with a Sonoma chardonnay. Dessert — a slice of peanut butter pie — was also pitch-perfect.

After all that, it was time to go back to the hotel, pick up our bags, and head for the airport. We had a super-friendly driver for the trip and cleared security without any problems. The flight even landed early in Chicago, which allowed us to get home and to bed about half an hour earlier than expected. It’ll be a few years before we return (if history is any indication), but trip number five will absolutely happen (if only so we can go to Husk). 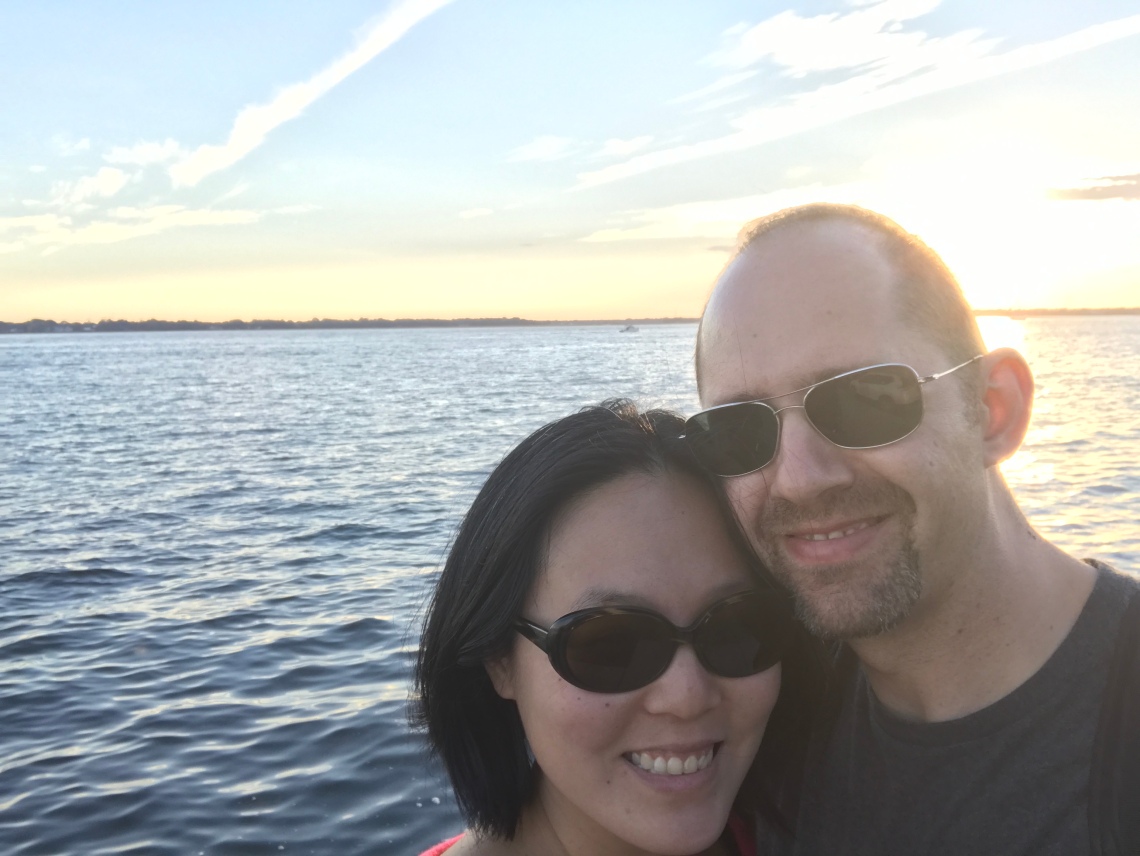