Virginia and I recently celebrated our wedding anniversary by doing what we often do: spend a lot of time on an airplane for a short burst of travel enjoyment. For this year, she found well-priced tickets to Vienna, so off we went!

We decided to take a car to O’Hare instead of using the CTA like we normally do. We reasoned that flying out of terminal 5 meant we’d have to not only take the train and walk up to terminal 2 or 3, but also take the tram over to terminal 5, which would cancel out any time savings. I think we were wrong — traffic was pretty terrible, which we hadn’t fully considered. We at least left early enough that we were at the gate in plenty of time. Otherwise, the flight was uneventful and we both nodded off before takeoff.

We landed in Vienna around 8:30am. After a ridiculously (and wonderfully) easy trip through passport control, we picked up tickets for the City Airport Train, a 16-minute nonstop express into the city center. At $19 for a return ticket, it was well worth it — it was at least as fast (and less expensive) than a taxi, and far faster than other transport options.

Like the Heathrow Express, it goes to only one city station and you have to make your way from there. In this case, that was welcome — we needed to stretch our legs and walked about 20 minutes to the Hotel Bristol. Here Virginia’s constant travel paid off. We had reserved a standard room using cash+points, and found ourselves upgraded to a deluxe room. Also, they let us check in immediately, which was about 10am.

Having settled ourselves, we headed back out for food and coffee. Vienna is of course famous for its café culture and excellent coffee, so we knew what we wanted. A friend of ours had said Café Sperl was her favorite, so it became our first café of the weekend. It didn’t disappoint! The coffee was outstanding and we both got a filling hot breakfast (cheese omelet for Virginia, speck/tomato/cheese egg scramble for me).

I should note that the weather all weekend was around 50 degrees Fahrenheit (10 degrees Celsius) with drizzling rain, so having hot food and coffee became a welcome and often-enjoyed respite.

We then wandered around the Naschmarkt for a little while, even with the uncooperative weather. Doing so, we realized we maybe shouldn’t have eaten so much at Café Sperl because there were so many enticing options! We’ll be smarter the next time we visit (and there will be a next time).

We originally planned to endlessly walk around the city, but the rain made that an unpleasant prospect. So we instead got 24-hour passes for a bus tour leaving from the opera house (across the street from our hotel) and hopped on. We spent about an hour going around the ring road that circles central Vienna before arriving back at the opera house and walking back to our hotel for a nap.

(A nap? Well, yes. We knew both that we had a late night ahead and we don’t sleep all that well on airplanes, so better to schedule some rest rather than try to power through an evening. It definitely paid off.)

After waking up, we suited up for the evening. Rather than our usual casual duds, we brought our A-games: a nice black dress and short boots for Virginia, and a three-piece suit for me. Suitably attired, we started with coffee and cake at Gerstner K.u.K Hofzuckerbacker around the corner. At first, we couldn’t find anywhere to sit, but as we headed downstairs Virginia found two seats obscured from view so we could enjoy our pre-opera treat.

Opera, you say? Yes! When we decided to go to Vienna, we immediately hit upon spending a night at the Vienna Opera House. Our two choices were Gounod’s Faust and Wagner’s Tristan und Isolde. I don’t like Wagner that much and it’s five hours long, so Faust it was. And… it was amazing. The Opera House is beautiful, our seats were perfect (dead center in the loge level), and the performances (both singers and orchestra) were superb. Of special note was Luca Pisaroni, who played Mephistopheles with panache (and a wink and a smile to the audience).

After the opera, we walked across the street to Restaurant Anna Sacher for a late dinner. We opted for the six-course “Back in Time” menu with champagne and Grüner Veltliner. While the food was outstanding, the service really made the meal. Our primary server was witty and helpful, suggesting the bottle of Grüner Veltliner we enjoyed. He also allowed Virginia to drop the last two courses when he didn’t have to. We left around 12:45am full, tipsy, and happy (also glad our hotel was only a few hundred meters away).

After the previous night’s fun, we decided to start the day a little later. Once we got moving, our first stop was the Café Museum a few blocks away for coffee and eggs. (I have an affection for eggs in Austria that dates back to my only other visit in 2002, where I had scrambled eggs with speck and chives almost every day.) Virginia misinterpreted one of the coffee drinks, but followed it up with what she wanted.

As we were leaving, we realized that, contrary to our initial expectations, we were maybe a kilometer away from the ring road. We’d thought we needed a taxi but instead decided to walk to our lunch destination, Café Schwartzenberg. Our breakfast was so filling that I was happy to just have a bowl of carrot cream soup while Virginia had Schwarzenberg-Würstel. The café was overly warm and crowded, so despite the good service we hurried to get back out into the open air. 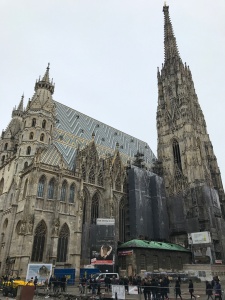 Thankfully, the rain had stopped. We’d taken the bus around the ring but we hadn’t spent any time inside central Vienna. So we wandered around the shopping district and passed by St. Stephan’s Cathedral and the Catholic Church of St. Peter before stopping at the Hofburg. We wanted to try out Café Central, but the long line of tourists persuaded us to find another place to stop. So we walked back to the Hofburg and visited the café there. (Our fifth in two days, if you’re counting.)

After spending a little time at the hotel resting and packing, we walked to our anniversary dinner at Glacis Beisl. Google Maps gave us a path through the Museum Quartier, and following that got us lost and worried we’d be late. We found a path out of the building labyrinth and found the restaurant. After the previous evening’s opulence, a lower-key dinner was the right call. We had two courses (and wine) there, and then went back to the hotel for a nightcap and sweets from Restaurant Anna Sacher to close out the day.

Having packed the previous day, we were able to get up at a reasonable time and have breakfast in the hotel before checking out. We walked back to the Wien Mitte station and caught the City Airport Train to the airport (again, highly recommended). Getting through security was pretty painless, as was our flight back to Chicago. We spent just enough time in Vienna to both enjoy ourselves and be convinced we should return. 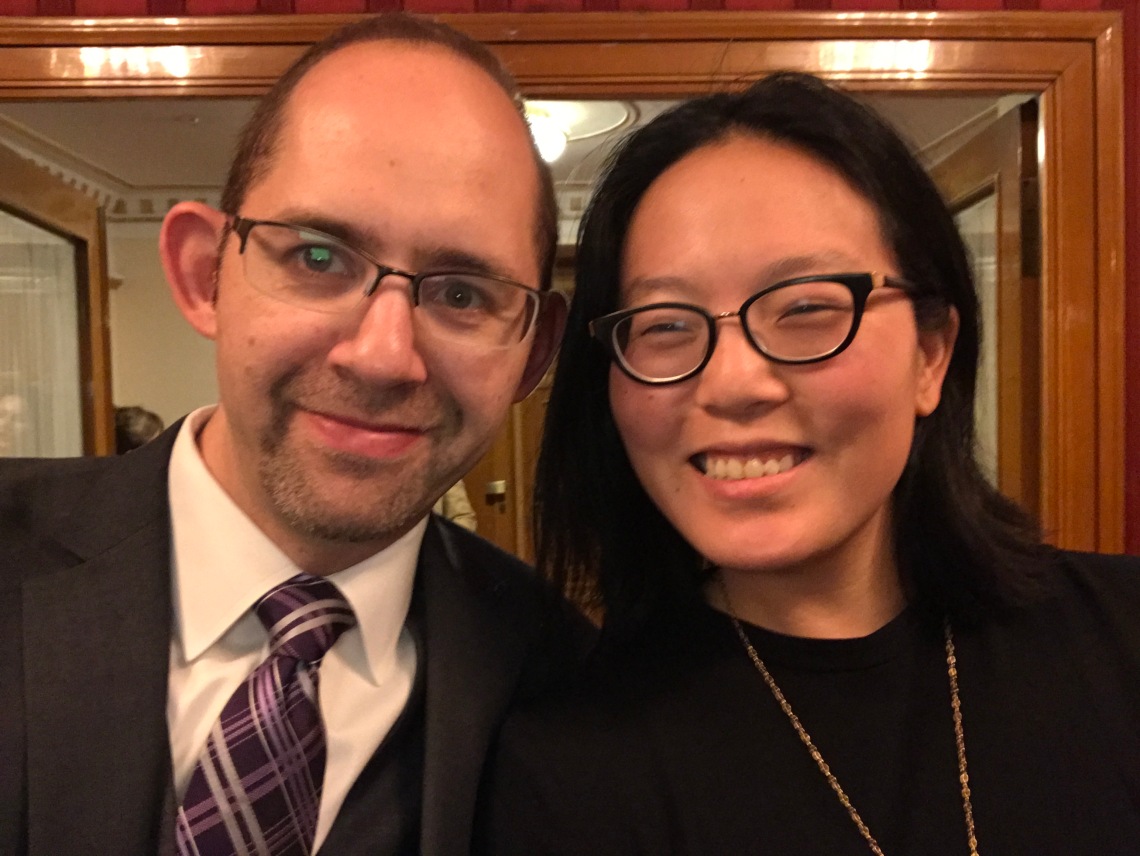