Virginia and I normally celebrate her birthday quietly — a nice dinner on our own somewhere in Chicago. But this year is different. Now she travels for work and needed to be on the West Coast both the day before and two days after. So rather than her flying home only to go back within 48 hours, I met her in Los Angeles for a version of our usual routine.

I usually don’t have much to say about the flight experience.

BUT. We had concrete plans once I arrived in LA, so of course that meant that I’d be beset with inconveniences that, in each case, weren’t particularly bad but added up to something.

And remember — we had reservations that were fine presuming I arrived more or less on time. So by the time I got off the plane, picked up my suitcase at baggage check (I opted to gate check rather than attempt to cram it into an overhead compartment, which turned out to be the right move on a full flight), and found Virginia, I was a combination of grumpy and unwell from the heat. Unfortunately, our next stop was a forty-minute drive away in LA traffic, which was moving but required a fair amount of rapid lane changing and didn’t help my state.

But then we arrived at … The Magic Castle! A friend of Virginia’s is a member at probably the most fun private club in America, and so we could go as guests. Sadly, instead of arriving very early for our dinner reservation and being able to wander the place, we got there five minutes late and had to hurry to get seated for dinner so we had plenty of time before the magic show. (You heard right — our dinner theater was magic.) Photography isn’t allowed, so I have nothing to show, but suffice to say we would very much like to return. Even after all the travel, we truly enjoyed dinner and the magicians on stage. Sadly, I was ready to fall asleep on my feet by the end of the show, so we left for our hotel to get some much-needed rest.

After the very long previous day, we took our time getting going. Once we did, we focused on priorities — breakfast and coffee. So we walked to the Grand Central Market, getting stymied by LA’s streets and sometimes lack of sidewalks along the way. Once we got there, we went looking for our intended destination, eggslut. The place is really well known, as evidenced by the extremely long line. (For those readers in Chicago, this compared to the lines that Hot Doug’s used to have.) It looked amazing, but we didn’t want to spend the next hour or two waiting for breakfast. So we did the next best thing — found a tiny unsung diner in the market called Jose Chiquito and quickly got chorizo/egg/potato/cheese burritos with salsa. We then went to G&B Coffee to get caffeinated before heading back into the sunshine.

We decided to take a look at the Walt Disney Concert Hall a few blocks away. As we arrived, we realized the Broad Museum was also there, and that the line for the museum was really long. 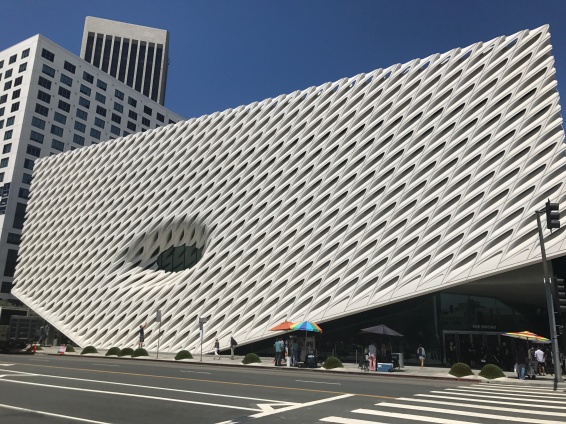 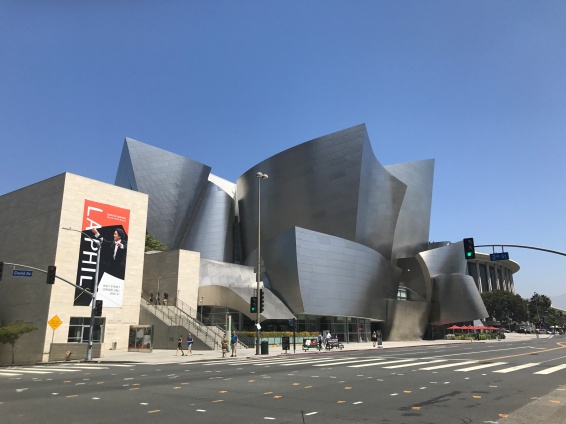 The Walt Disney Concert Hall.
After taking a few pictures, we left to check out Grand Park. The park itself isn’t that large, but has a nice fountain and excellent wading area, just enough to get your feet wet. (And we did.) As it happened, music was playing the entire time, turning the park into a fun dance party. We stayed maybe 30-45 minutes, just enjoying the low-key action.

By that point, the sun was both high and hot. So we decided to get inside by visiting the Museum of Contemporary Art (the line at the Broad was still insane, while the MoCA line was almost nonexistent). We spent about an hour walking through the permanent collection of paintings and sculptures. Virginia’s not that much of a modern art fan, especially the abstracts of the mid-20th century, so we didn’t dawdle. The presentation was well curated and we found much to admire.

After a quick stop in our room, we went back out for coffee and people-watching. Our intention was to visit Pershing Square, but it seemed closed in preparation for a concert that evening, so we walked across the street to Pitchoun Bakery and settled down outside with lattes, a pot de creme for Virginia, and an almond croissant for me. After about thirty minutes, we were already planning to head back to our hotel to check out and get ready for dinner when a twosome at a nearby table started arguing loudly enough that we could hear most of it. I’m glad we hadn’t planned to stick around.

After a stop at the hotel to change, check out, and retrieve our car, we went to dinner at 71Above (so named for the floor of the building it’s on). Dinner was spectacular, both the views and the food. We both had the three-course prix fixe menu with wine pairings, and they were well-tailored to our food. We finished with dessert and coffee, and then drove to our hotel in Newport Beach to crash for the evening. Unfortunately, there are multiple Marriotts in the area, so we went to the wrong one first before being helpfully guided to the correct hotel. All’s well that ends well.

Virginia had to teach early on Sunday, which is why we were in Newport Beach in the first place. So we roused ourselves around dawn and got coffee downstairs in the hotel restaurant (luckily, they sell coffee starting at 6:30am, even through the restaurant doesn’t open until 7am). Virginia left for work and I had over two hours to myself.

I ended up mostly on the move. I worked out at the hotel gym, which was basically empty given the early hour, and then sat outside with a coffee and scone for about an hour. Getting restless, I left the hotel and took a brisk 40-minute walk in the nearby ecological reserve, which was almost meditative — I made a point of staying in the present and concentrating on my walk rather than letting my mind wander to work or other things.

I returned to the hotel a little before Virginia got back. We were both hungry by that point, so we went to the Old Vine Café for brunch. I called ahead and they said they had no line. But by the time we got there, that was no longer the case and we had to wait over half an hour. At least the weather was pretty much perfect to sit outside. We finally got a table and ordered rabbit mole with poached eggs for Virginia, and biscuits and gravy with fried green tomatoes and chicken sausage for me. Wonderful and filling, which we intended knowing we were getting back on the road to LAX afterward.

That didn’t mean we had to go the direct route, though. We decided to take the Pacific Coast Highway and stop in Long Beach to see the Queen Mary. We’re not sure why Long Beach has become the ocean liner’s resting spot, but it’s a sight to see, even fifty years after its last cruise. 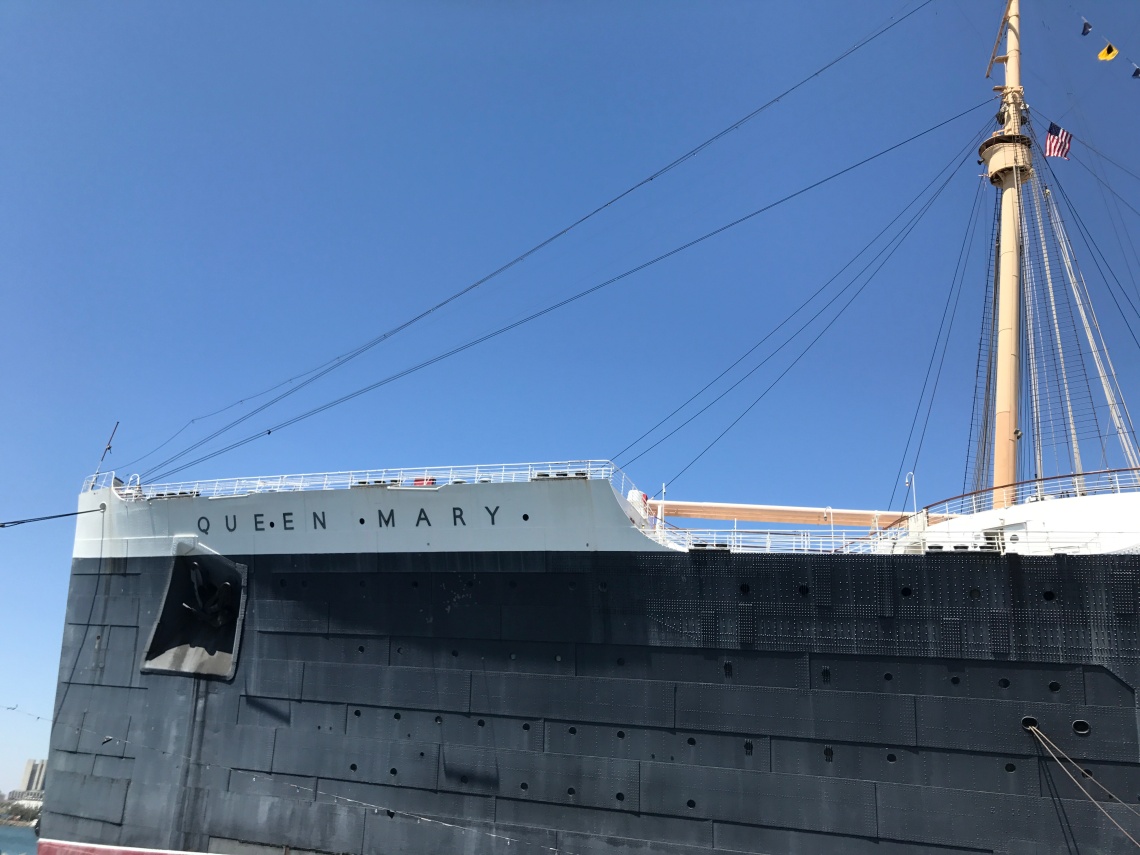 We could have bought tickets to go inside, but decided it wasn’t worth chancing LA traffic, so we left almost immediately and got to LAX with about thirty minutes to spare. It was just enough time to stop in the airport lounge for a glass of wine before going to the gate, getting on the airplane, and going home.