After our usual rooftop deck breakfast and coffee, followed by some much-needed exercise (pretty much always the case when you’re eating croissants daily), we finished making our travel arrangements for the earlier departure. I also started a lost luggage claim with our credit card company, who insures bags during travel. Done with our paperwork, we visited the Dijon market to pick up groceries for the last time.

After putting everything away, we decided to splash out on lunch at Loiseau des Ducs, a Michelin starred restaurant under five minutes from our place. It was well worth the visit! We started with watermelon soup with pistou, followed by grilled eggplant with pesto, toasted pine nuts, and eggplant cream. The main was Guinea fowl with summer vegetables and herb gnocchi, and dessert was raspberry cream and sorbet. I selected a Alain Chavy St. Aubin 1er cru En Remilly 2014 to pair with everything. Just fantastic.

Completely stuffed, we returned to the apartment to both relax and figure out how to get shipping boxes for the wine we’d been buying. I had contacted a few businesses and hotels that sold wine luggage, so we had a few options to consider. We determined our plan for the next day and settled in for the evening. I cooked veal escalope, sautéed in butter with shallots, then topped it with a sauce made with butter, shallot, red wine, and fresh parsley. We also had a tossed green salad, followed by Morbier and Langres cheeses. All this went with a 2007 Aegerter Beaune premier cru we had purchased in Nuits-Saint-Georges.

Our last full day in Burgundy started early, as we had a lot to do. After breakfast, we got in the car and headed south. Our first stop was PB Regnier, a shop in Brochon that among other things, sells wine shipper boxes and styrofoam fillers. Perfect! We bought enough for six cases, loaded up the car, and thanked the man who helped us get everything before getting back on the road.

Our main stop of the day was Domaine d’Ardhuy. We’d visited in 2016 on the same tour when we discovered Michel Nöellat, and wanted to pick up more wine to store for later. Majoric, our host, was charming and wonderful as he led us through several white and red wines. As we expected, they were excellent and we purchased a mixed case to take with us.

We drove back to Dijon to put everything away before our reservation for lunch at l’Uns des Sens. We had gotten interested by walking by it, and they were always full! Clearly this was a place to be, and we were right. Lunch that day was

We decided to take one last pass through the antiques district, but sadly found no clocks. Storm clouds were approaching, so we quickly went home to beat the rain (success!). We spent some time packing up all the wine in the boxes we had purchased, which frankly was most of our packing (clothes are easy with packing cubes). For our last dinner in the apartment, I sautéed pork chops in butter and served them with salad and the last of our Comte cheese. We savored the food and Champy Hospices de Beaune Pommard 2008.

We’d decided to stay in Dijon and then drive to Lyon for our flight, which meant a very early start. We had yogurt and coffee for breakfast, packed up the car, and got on the highway to Lyon. The drive itself was uneventful (which is the ideal outcome).

Once we got to the airport, Virginia dropped me off with the wine so she could return the rental car. In the meantime, I looked for and eventually found the lost luggage office. Why was I there? Because they found our luggage! I had received a call the day before about having it delivered. I asked where it was; they said it was at Lyon airport. So I asked them to leave it there and I’d pick it up. A friendly agent helped me find it in their lost luggage collection, and I was able to put all our boxes into the luggage for the trip to Madrid and home by the time Virginia returned to the airport.

If only the rest of our time in Lyon airport was so smooth. Instead, we waited thirty minutes for someone to show up and check in luggage, only to find our boarding passes didn’t work. We learned no boarding passes for our flight didn’t work, so we all loitered by the entry for another half hour until wiser heads prevailed and we were allowed in. We walked to the gate and found the door to the nearest bathrooms was locked. But it all worked out in the end. Our flight to Madrid was easy and our bags made it without incident.

We took a taxi from the airport to the Circulo Gran Via hotel, which was a fast twenty minutes. After checking in, we decided to stay for a late lunch and beat the heat (almost 100 degrees Fahrenheit, 38 degrees Celsius) and humidity. 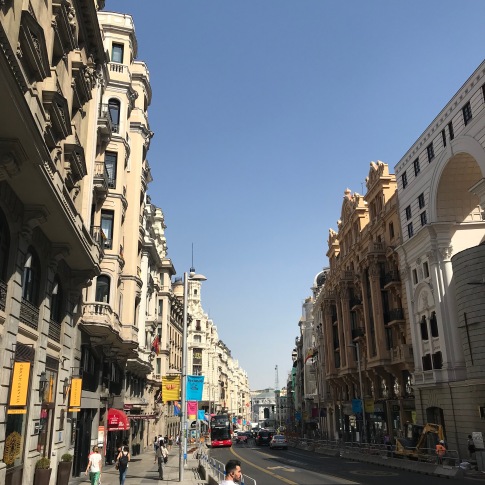 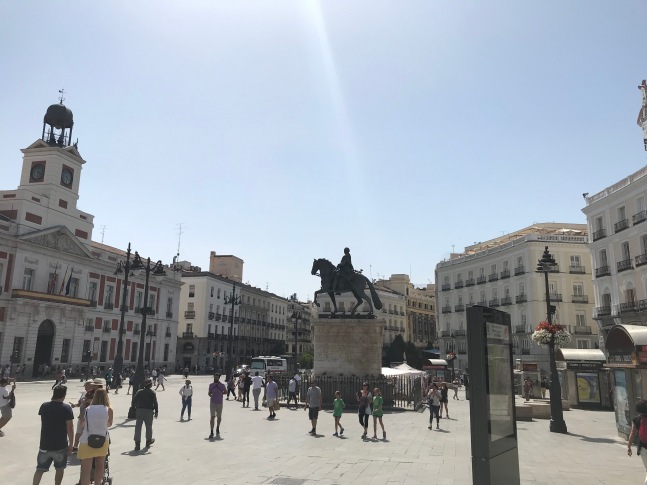 Our main event in Madrid was a tapas and history tour in the city center. There were five of us, and Luke, our host, was excellent as both guide and companion for an evening out. Two of the other guests worked in the travel industry and the third was widely traveled, so we all had plenty to talk about in between bites from four different places. We ended the night firmly believing we needed to return to Madrid and explore it further.

Sadly, we’re off for home today and can’t spend more time in this fascinating city. Instead, we had a very good breakfast at the hotel before checking out and going to the airport. Everything took time, but we had plenty to spare before our flight. The trip home was easy and everything arrived in the luggage claim as expected. We had our usual fun times with Customs, as they never can believe someone would bring home six cases of wine for personal use. But it’s never unpleasant – we pay our import duties (which are very reasonable) and headed for home. 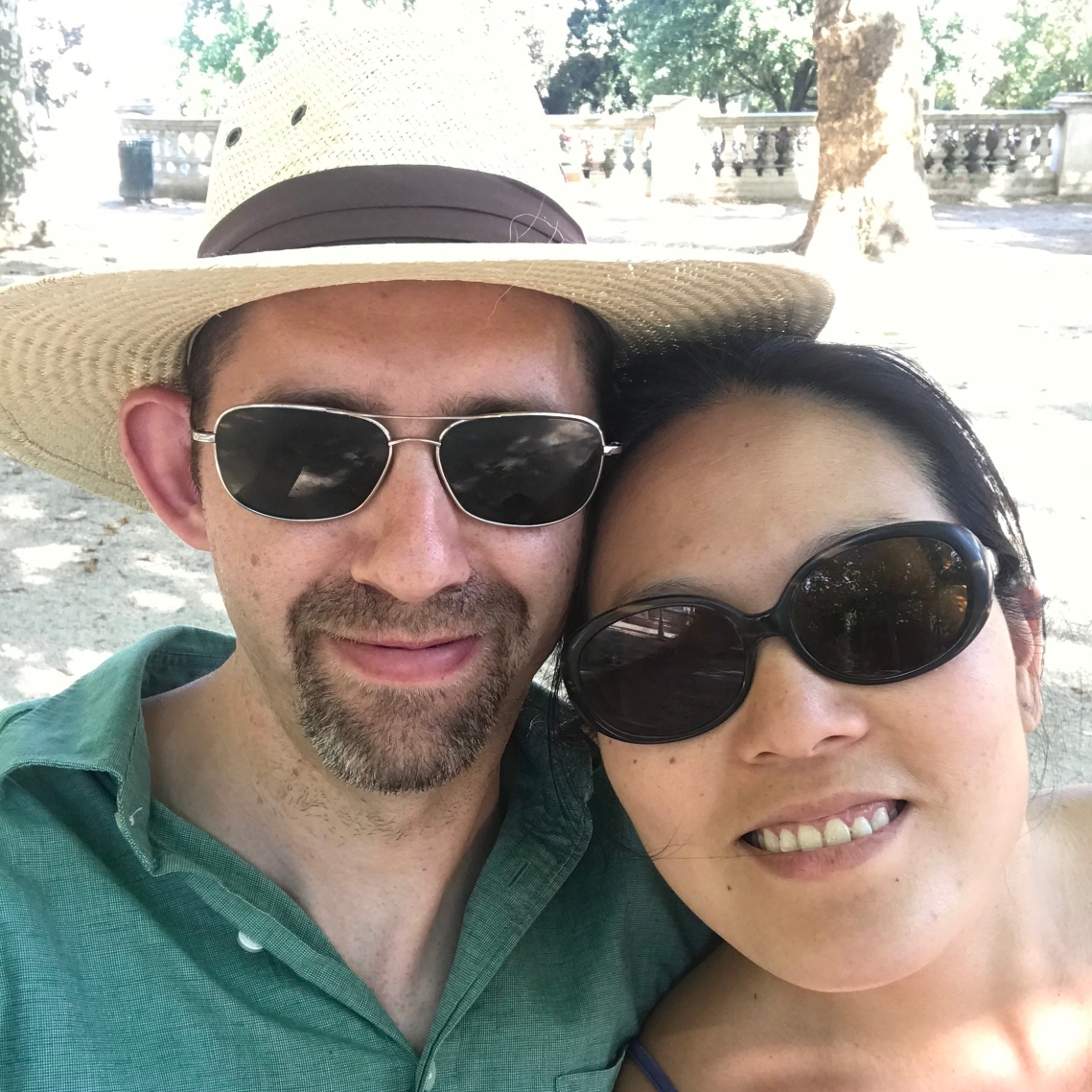