We woke up ready to get to a market and do some grocery shopping. We weren’t the only ones, either. We arrived in the kitchen to find Doug and Kristen had already gone to the boulangerie for lots of baked goodies. I got coffee going and we all made it to a full state of wakefulness.

Once everyone was ready (around 9:30-9:45am), we split up into our two cars and drove the fifteen minutes or so to Chagny, which has a very large Sunday market. Thankfully, we found parking quickly and waded into the fray. It wasn’t too busy yet, so we could easily peruse all our tasty options. Doug and Jeffrey were especially excited and you could see the mind meld as they plotted menus for the afternoon and evening. We picked up cheeses, sausages (both dried and fresh), vegetables, and fruits.

I had to leave early in one of the cars as I’d arranged to pick up wine I’d purchased a few months ago. I needed to go south into the Côte Chalonnaise, about fifteen minutes’ drive away. April agreed to join me and we left the others to their shopping bliss as we set off to find Le Clos Saint Martin in Mellecey. Google Maps got us to the exact location — we were surprised to pull off to the side of the road, look left, and see the sign.

To my surprise, the person I’ve been communicating with solely via email for eight years, Stephan, was there. I wasn’t expecting him as he had indicated he would be in the UK by then. But here he was, and we chatted for a few minutes while we loaded up the wine in my car. I’ll admit it would have been great to spend more time with him, but he seemed inclined to get on with his work and we needed to meet up with our friends. So we made our goodbyes and drove home, stopping for a few pictures.

After a veritable smorgasbord of charcuterie and cheese for lunch, we drove up to Beaune to join a “bike and wine” tour Virginia had found. We joined two other groups and, at somewhat varying speeds, bicycled out from Beaune into the surrounding vineyards. We stopped frequently for explanations around winemaking and eventually arrived at Domaine Lahaye in Pommard to taste and purchase wines. We enjoyed the Meursaults and picked up four for the following evening (2011, 2007, 1999, 2008 premier cru “Les Charmes”). We then coasted back to Beaune (most of the ride was downhill), retrieved our wine and cars, and drove back to the house.

Jeffrey and Doug used the sausages and vegetables to make a bolognese, which we ate with thick loaves of bread. Some of us added a truffled cheese to the sauce, which made it only richer. Domaine Denis’ Bourgogne and Savigny-les-Beaune went very well with dinner (as pinot noir often will), rounding out a great first full day.

We decided before arrival that we had to visit the Monday market in Louhans, especially on the first Monday of the month. Why? Because the (reportedly) best chickens in the world, Bresse chickens, are available there live. We thought that meant that we could select a live chicken and have it prepared for us to cook on the spot. So of course we had to see that, even if it was an hour’s drive away and we needed to get there early to secure parking.

We left the house at 6:45am so we could arrive and park before 8am. And we made it! Parking was a breeze and we began wandering around the market, looking at vegetables and non-food things. A gregarious fromager beckoned us to try some two- and three-year old Gruyere (both were delicious). We purchased a chunk of the two-year Gruyere and then he just gave us a small wheel of triple creme as a gift! Plus he told us where we could find the live chickens.

When we got to the chickens, we walked up and down the aisles, seeing lots of chickens available. However, we saw zero slaughtering facilities and all the live chickens were going into boxes for people to take home as is. So we backtracked and purchased three pre-prepared chickens to cook that evening. Jeffrey and Doug also found a few ingredients to add to dinner, and we left happy we made the journey. 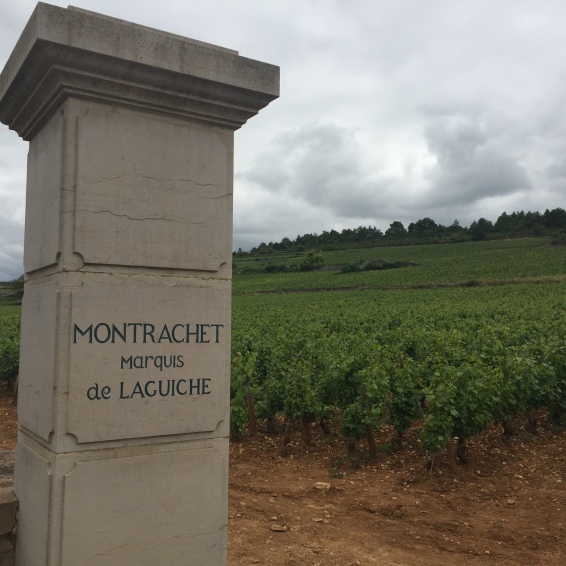 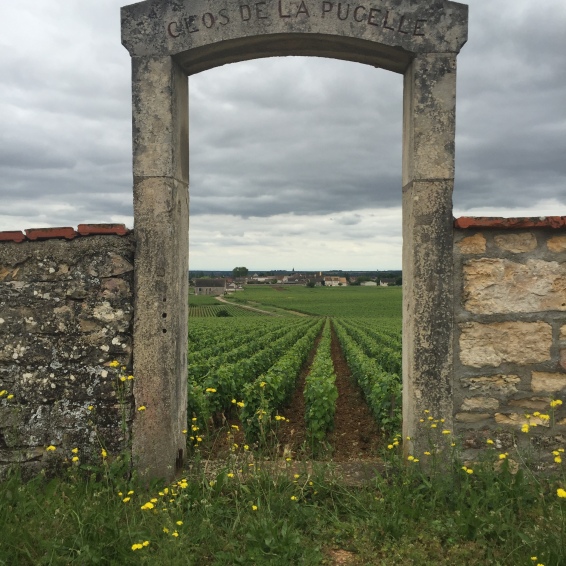 After returning, our resident chefs began brining the chickens for the afternoon while the rest of us snacked and relaxed. Around mid-afternoon, most of us headed out to walk up to the grand cru vineyards between Puligny-Montrachet and Chassagne-Montrachet. These may be the best white wine vineyards in the world, and the wines from grapes in these vineyards fetch prices of several hundred dollars. We walked up above them to the top of the hill and marveled at both sides — Haute Côtes de Beaune to  the west, grand cru and premier cru to the east. Finally we walked back so cooking could begin in earnest (and the rest of us could get in the hot tub).

Jeffrey and I had bought wine to go with the chickens (the aforementioned Domaine Lahaye Meursault 2011, 2007, 1999, and 2008 premier cru “Les Charmes”). We sat down to a salad of lettuces, tomatoes, and cucumbers, roast chickens, and buttery mashed potatoes, all of which was outstanding. The wines paired well and showed how Chardonnay develops over time. After dinner, we had a cake Virginia ordered from the boulangerie — strawberries and cream — and went back outside to the hot tub to hang out until well after midnight.