After a slow post-Bastille Day start (with the requisite caffeine and baked goods), the four of us drove up to Dijon, the region’s capital. Even so, the city is all of 150,000 people, far smaller than one might think for a city of its perceived reputation (you may have heard of its mustard, for instance). In addition, it’s been the region’s seat for centuries, back to when the dukes of Burgundy were more powerful than the kings of France. Quite a bit of the central city reflects that, with many buildings from the 15th to 18th centuries still standing.

We arrived around noon, which of course means lunchtime. We walked to the Dijon market hall and picked a restaurant more or less at random. The place itself was fine, though not distinctive in any way. After lunch, we decided to meander with minimal plans and see what happened. After walking through the Ducal Palace (something of a surprise because it’s still an active government building and not open to tourists), we stumbled across the Musée Rude, which held several sculptures by François Rude (including a version of the bas-relief on the Arc de Triomphe). Turning the corner from the sculptures led us to an archaeological site where the ancient city walls had once stood. From there, we did a little shopping and circled around back to our car to drive back to Puligny-Montrachet. 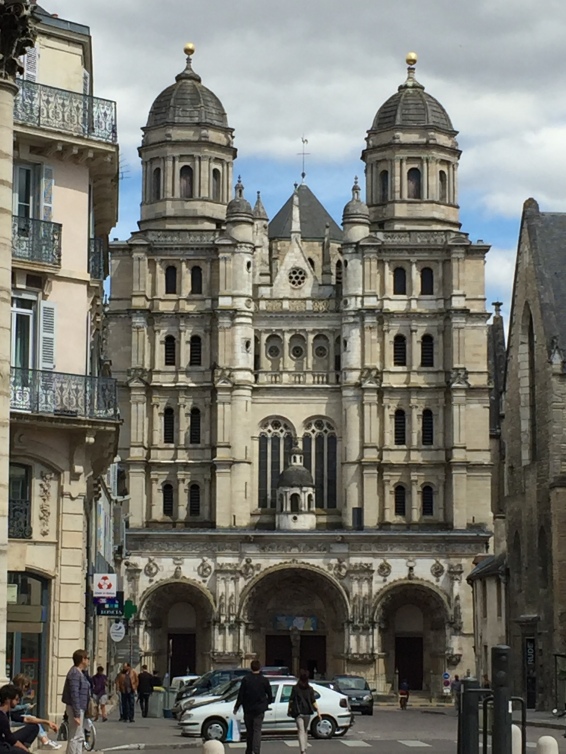 Dinner included a lot of leftovers, with the key addition of homemade frites with the house’s deep fryer. (Yes, we had a deep fryer at our disposal. But not measuring spoons for some reason.)  They were excellent, and capped off a full day.

The two-week mark of our trip, and a transition day. Jordan and Edward were heading back to Paris for the flight home to New York, but I had to drive them to Gare de Beaune solo. Why? Because Virginia was staying at the house to welcome our friends Andrew and Catherine and their daughter Gigi, who had made a beeline from Charles de Gaulle airport after an overnight flight. While she gave them the tour and let them get some sleep, I went to the market in Beaune and picked up some ingredients for lunch and dinner before getting back to the house.

After everyone woke up and felt a little more human, we had lunch at the house and then got in the cars to visit the Chateau de Pommard. Virginia figured this would be a good place to introduce the region and get a good tour, and she was very much correct. The tour took us into the vineyards and the guide explained very well the importance of terroir and how the soil composition can change significantly in just a few meters. From there, we tasted several wines, which were all good.

Unfortunately, the chateau presents its wines like a Bordeaux estate, attempting to drive high prices for the wines from its estate vineyards under a notion of exclusivity. However, Burgundy simply doesn’t work that way. Location is everything, which is why the vineyards are defined and classified independent of the winemakers. The chateau’s estate vineyards are classified as “village cru”, which doesn’t fetch top dollar, or anything close to what the chateau is asking. The wines are good, but no one’s going to mistake them for wine from a grand cru vineyard, and they shouldn’t be priced as they are. (Interestingly, their wines from vineyards other than the estate are priced in line with other winemakers.)

Afterward, we stopped at the local Carrefour for a few necessary things before going home. Dinner was pasta with tomatoes, bacon, and capers, grilled chicken, and a green salad, and then everyone collapsed into their respective beds.