By this time, I’ve started forgetting my normal routines at home and internalized a new one:

I really miss that routine.

Anyway, I did all that as we started slowly. Later in the morning, we got into a car and Andrew drove us to Chagny to visit the market. It was pretty much our go-to favorite: large, broad, and perhaps most importantly, close by. Also, most people arrived on Saturdays, so a Sunday market made a lot of sense. We spent over an hour wandering the market, purchasing Bresse chickens, steak, pork, vegetables, cheeses, and more. Catherine and Gigi visited all the patisseries in our path, picking up a few goodies.

We brought everything back to the house and had lunch in. While we were eating, Catherine suggested we visit the Château de Couches and see their annual fair.

Yes. We visited a Renaissance fair in Burgundy. 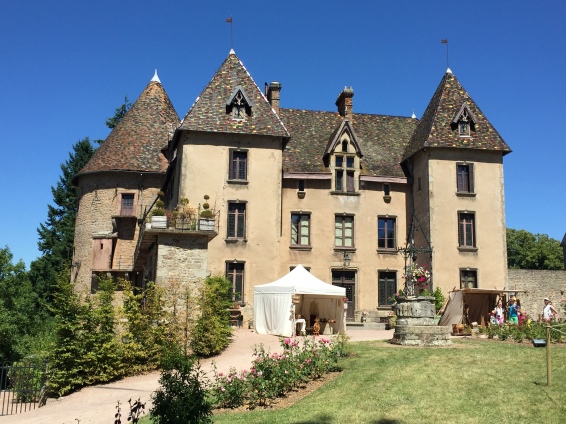 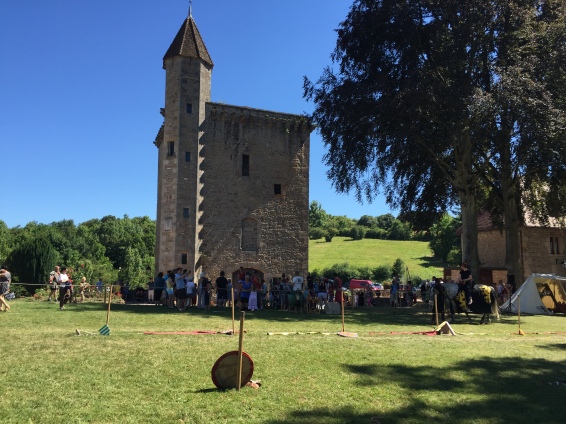 The original tower and the site of jousting mayhem.

And it was great. First, it was at an actual castle with the original building dating back to the 12th century. Second, it was fun to try figuring out everything going on without benefit of language fluency. The jousting fit this bill — they had an emcee who pumped up the crowd with pretty bold statements and knights who trash-talked each other and the emcee. In between, they completed feats of horseback riding, archery, and sword-fighting. Elsewhere Gigi could pet animals, and finally we all found the tasting room and enjoyed a very agreeable Chardonnay.

Having been more than pleasantly surprised with the fair, we went home and I made steak frites (remember, we had a deep fryer) with a green salad for dinner. A twilight walk in the vineyards behind the house ended the day.

We had originally discussed driving to Dijon, but decided to push that back a couple of days and enjoy the slightly cooler weather. So Andrew and I pulled out two bikes and rode up to Beaune, 14km away. Andrew is a serious cyclist and was likely kind to me in setting the pace. Once we arrived in Beaune, we rode into the Place Carnot in the center of town and stopped for a well-deserved coffee and freshly pressed orange juice. Andrew noticed the carousel in the middle, which served a purpose later.

After about 45 minutes, we paid and got back on the bikes for the return trip. One thing neither of us reckoned upon was how much we were used to the flat geography of Chicago. Burgundy is hilly, and we often found ourselves down-shifting to handle the climbs. At the end, we climbed to the top of the vineyards over Puligny-Montrachet to take in the view and then zoom downhill.

Unfortunately, the ride meant we weren’t ready to eat lunch until almost 1:30pm, and by that time restaurants weren’t seating new customers. (Lunchtime is a fairly strict 12-2pm.) After trying one more restaurant and finding it closed for the day, we went back to the house for lunch — charcuterie for Andrew, Virginia, and me; grilled cheese sandwiches for Gigi (and ultimately Catherine). 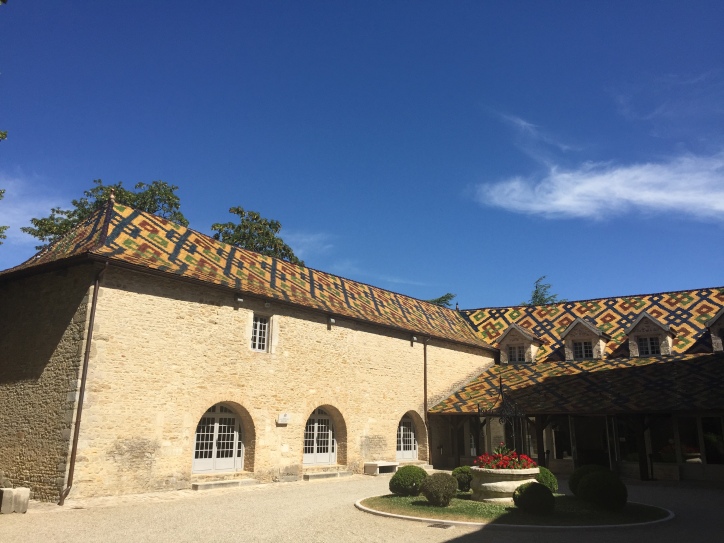 After lunch, we drove down to the Château de Santenay, which Virginia had previously found and Patrick, our tour guide from eleven days before, had endorsed. We joined the tour, which spoke a little to the history and mostly to the wine, even though the winery was fairly new. Santenay as a village is known for its softer Pinot Noirs, with light color and tannins. The château makes wine from all over Burgundy, though, and we ended up buying a few bottles for drinking at the house.

Andrew, Catherine, and Gigi then went to Beaune to treat Gigi to the carousel as a reward for humoring the adults and their wine. Meanwhile, Virginia and I went home to take care of kittens. With some time and no competing commitments, I roasted a Bresse chicken with carrots and sautéed mushrooms. Andrew added carrots virtually poached in butter (vive la France!) and I made a gravy from the chicken jus. Dessert was macarons from post-carousel Beaune, and after that I was very much ready for bed.