We arose earlier than usual and ate breakfast fairly quickly, especially compared to our usual leisurely approach in France. We needed to do so in order to get an early start for our overnight road trip to Champagne. Unlike two years ago, being on our own and further north meant the region was about three hours’ drive away, which was very doable.

Of course, we still had to do it our way. So Virginia made a reservation for lunch at Le Grand Cerf, a Michelin-starred restaurant in the village of Montchenot. Unfortunately, it took a few extra minutes to get seated and we had an appointment for a winery tour, which meant we felt a little rushed throughout the meal. But what a meal! It included an amuse-bouche, soufflé de turbot au pain d’épices, quasi de veau de lait fermier rôti, fromages, strawberries and raspberries with ice cream and whipped cream, with a berry sauce, and mignardises. We paired it with a bottle of Champagne (when in the region…) and enjoyed everything outside in their garden.

But then we had to run for it! We ended up making our tour at Champagne Canard-Duchêne, though we were late and felt bad about holding up the other guests. At the same time, we could now relax as we were shown the winery and 19th century cellars. We also got to learn more about the Champagne method of winemaking, which is almost the opposite of that in Burgundy. Champagne houses have a “house style” and aim for consistency of flavor year after year, blending wines from dozens of vineyards, often from multiple vintages, to do so. In contrast, Burgundy is all about the terroir and true expression of a single plot.

After the cellar tour, we all went upstairs for the tasting. Virginia inadvertently heard the tour guide incorrectly and we started with the wrong wine, which was their base non-vintage brut. Once we all realized what ha happened, we got to start over with the wines we had wanted, informed by the first wine. So it all worked out, we basically got a free extra glass of champagne, and bought six bottles to take with us.

After all that bubbly, it was a thankfully short drive to Reims and our hotel, located in the center of town. We checked in and headed right back out to wander around. Reims is about the same size as Dijon, and is similarly very walkable. We started with an aperitif at L’Apostrophe, which offered great people-watching. I impulsively said, “let’s find me a hat!” So we started looking at shops, though we didn’t find anything I liked or that fit me. But it gave us a purpose and led us further into the city center. We arrived at the Place du Forum to find a free concert in progress, so we stopped to listen to a few songs and take a look around. We sat on the edge of the place’s fountain, hoping the kids wading around wouldn’t splash us (they didn’t). After a dog jumped into the fountain at the urging of its owner, we decided it was time to move on. 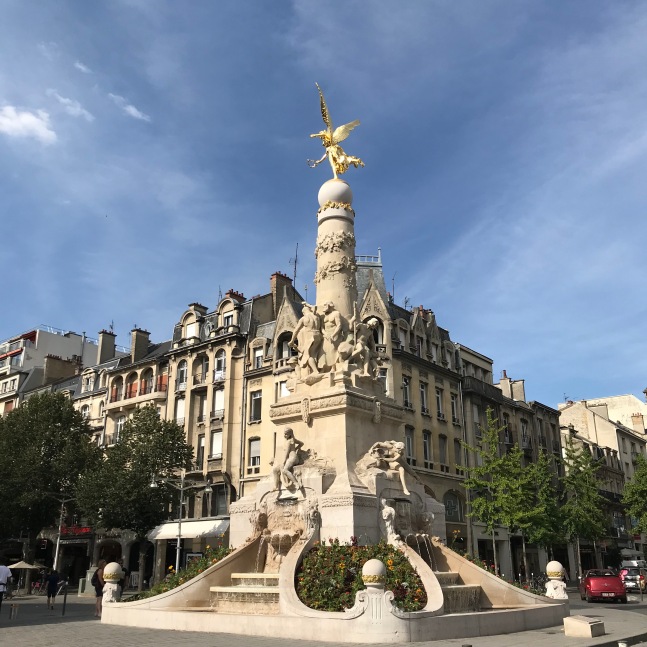 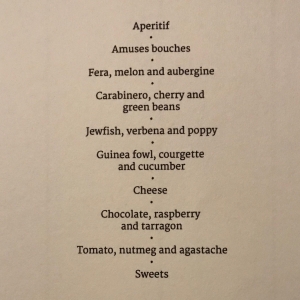 We walked around the perimeter of Notre-Dame de Reims, a classically beautiful cathedral, before ending our walk at our dinner destination, Restaurant Racine. Specializing in French-Japanese fusion, Racine offers its guests a distinctive food experience that was evident in every dish. We chose the wine pairings, which were similarly interesting and mostly on point.

After dinner, we strolled back to the hotel and quickly fell asleep.

We started the day as usual, looking for breakfast. Virginia found a well-regarded spot, but it was closed while the owners were on vacation. We managed to find an open spot — La Bonbonnerie — and enjoyed escargots avec chocolat (chocolate pastries) and French press coffee. After that, we checked out and drove to Épernay, the home of many of the largest Champagne houses. After getting lucky with parking, we walked up and down the Avenue de Champagne, gawking at Moet & Chandon, Perrier Jouet, and other houses as we went. On the way back up the street, we stopped to taste wines at Champagne Michel Gonet. We were originally attracted by their outdoor space, but the recent rain drove us indoors to their gorgeous mansion (so, win-win). We were the only ones there, and were amazed at the wines we tasted. Michel Gonet specializes in vintage champagnes from Chardonnay (blanc de blancs), and we were struck by the character each wine had. We ended up buying seven bottles — six to take home, and one to enjoy in France.

We asked for a lunch recommendation and were guided to La Cave a Champagne, a small restaurant off the main roundabout. We both had the Sympa menu (trout tartare, pork tenderloin in mustard sauce, and cheese for me; sausages, pot au feu of veal head/cheek, and cheese for Virginia). Now extremely full, we walked around Épernay for a while before going back to the car and driving to Dijon. We arrived in late afternoon and kept things quiet with a few games of Magic: The Gathering (all lopsided victories, 2-1 to Virginia), and a light dinner of jambon persille, spinach, and the last of our Epoisses cheese.

Back in Dijon, we returned to our routines: breakfast on the rooftop deck, followed by exercise before it got too hot outside. Then it was time to get back in the car for the third day in a row, this time to Nolay and their annual antique market. We decided to take the scenic route, which was far more difficult and frustrating than we’d anticipated due to unexpected construction. But eventually we got on the right road and were on our way.

It was noon by the time we arrived in Nolay, so we decided to have lunch first. We sat down at one of the restaurants in the Place Monge, which was fine but not exceptional (somewhat rare for us — usually the food was better). But it wasn’t too expensive and we could check out the antique fair, which was next door. Unfortunately, it was kind of a bust as well. The fair seemed more arts-and-crafts than antiques, and it was very small. The actual antique stores were all closed and we didn’t want to wait a couple of hours for them to open, so we left, sadly dissatisfied.

We decided to take the Route des Grand Crus back, going through Chassagne-Montrachet, Puligny-Montrachet, Meursault, Volnay, Pommard, Beaune, Nuits-St-Georges, Vosne-Romanée, Vougeot, Gevrey-Chambertin, Fixin, and Marsannay. On the way, we detoured from Corgoloin up into the Hautes-Côtes de Beaune to check out Magny-les-Villers and Villers-la-Faye. A book Virginia had read involved house renovations in these villages, and we wanted to see them firsthand.

Dinner was charcuterie and bread with a Michel Gonet Extra Brut Champagne 1998 (the bottle we picked up the day before to enjoy in France). Everything was excellent, and helped make the day an ultimate success.