Another day, another croissant. I love France. 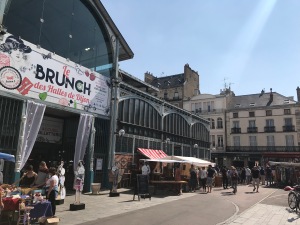 After breakfast, Virginia got us going to the flea market at Les Halles. After the previous day’s bust in Nolay, we wanted a real crack at an antique fair. This one was the real deal at least, but we didn’t find what she was looking for. However, we did find a new set of eyeglass frames for Virginia, which was unexpected and pretty great.

Since we were already at the market, we took advantage to pick up a few things for lunch, and then headed back to eat. Lunch was salad with duck breast, chèvre, and a mustard vinaigrette (our standard for the entire trip), along with some of the Marcillet Hautes-Côtes de Nuits. The rest of the afternoon was very utilitarian, anchored by a round of laundry at the laverie some 10 minutes away.

We broke with tradition and ate dinner out, choosing a wine bar Patrick had recommended called La Cave se Rebiffe. We went a little crazy, getting both a 2006 Meursault rouge and a 2002 Pommard 1er cru, paired with Serrano ham, pork terrine, and a cheese plate. While on our second bottle, we struck up conversation with a cyclist named Robin, who was on a trip from Amsterdam to southern Burgundy. He, we, and the bartender chatted for a while and we shared a glass of the Pommard with Robin before we all said good night. Lots of fun all around.

We woke up wanting to visit museums and antique stores. However, Dijon wasn’t going to be cooperative by, you know, having any stores or museums open. After admitting defeat, we walked up to the Place de la Republique, which has a wonderfully large fountain and plenty of benches from which you can watch it and the people passing by. We stopped there for maybe twenty minutes before moving on, walking a roundabout path back into the city center and past many, many storefronts closed for the day.

Clearly Monday was a day to be homebodies, so we acquiesced. A few games of Magic: The Gathering was followed by dinner (tomato/mozzarella/basil ravioli with a butter/olive oil/white wine/shallot sauce, with green beans), and we ended with reading and music.

Tuesdays are market days, so we’re up earlier than usual. Breakfast and exercise complete, we hit the market to get cheese, meat, vegetables, and sparkling water. We took everything home before getting in the car.

Our afternoon destination was Domaine Michel Nöellat in Vosne-Romanée. We had learned about it on a tour two years ago, and loved the wines so much that we returned then to purchase a case to take home. This time, we made an appointment to meet with Sophie Nöellat, who represents the sixth generation at the winery. Sophie was extremely nice and generous, starting with allowing us to taste pretty much whatever we wanted. We focused on Nuits-St-Georges and Vosne-Romanée, tasting both village and premier cru wines. So very good. We bought 18 bottles to take home, and then were extremely surprised to see that Sophie and her mother Isabel (who remembered us from two years ago) gave us two bottles as gifts to have here in Burgundy (a 2015 Savigny-les-Beaune 1er cru and a 2008 Nuits-St-Georges 1er cru Les Boudots). Part of the appeal of Burgundy is building relationships with owner-grower wineries, and this one is without question one of our favorites.

We took our wine back home and put it away in the coolest, darkest part of the apartment, and then refreshed ourselves for dinner. We had made advance reservations at the only restaurant in Dijon with two Michelin stars, Restaurant William Frachot, and it was incredible from start to finish. 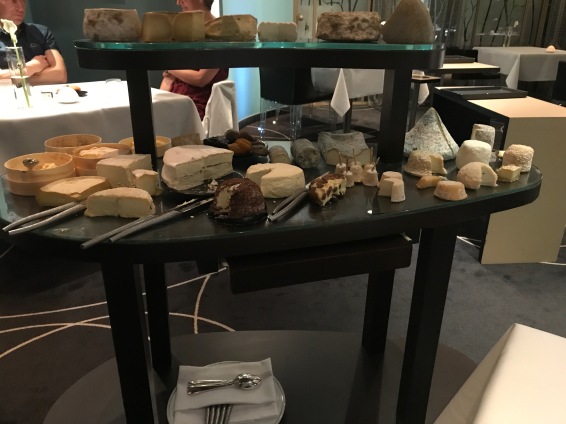